The Device The Test
How it Works

The ForeseeHome device is designed as a closed viewer for single-eye examination. A set of lenses embedded within the viewer ensures that the test is viewed as if projected from infinity, such that a patient with good distance vision sees the test in maximal focus. 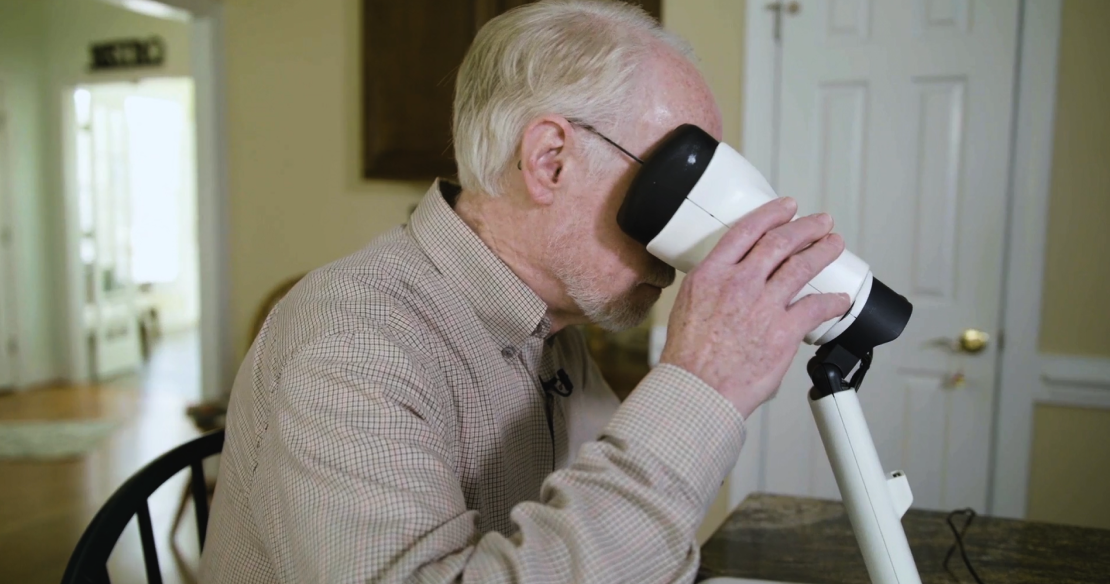 The patient starts the test by inserting their head in the viewer. A pair of infrared sensors located in the walls of the viewer detects the position of the head relative to the viewer and ensures that the test is not presented until the head is correctly positioned. The patient can rotate the viewer to test each prescribed eye. 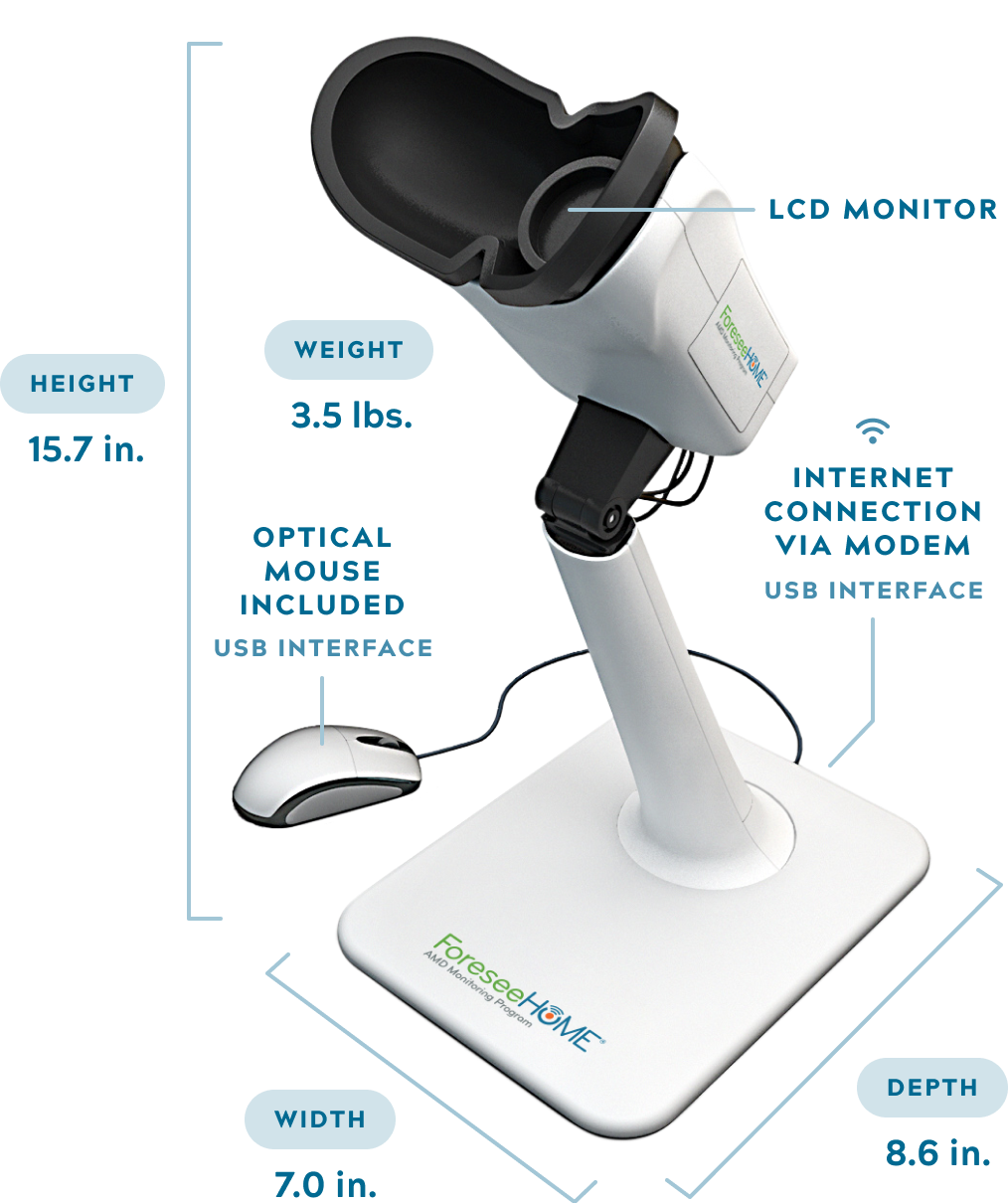 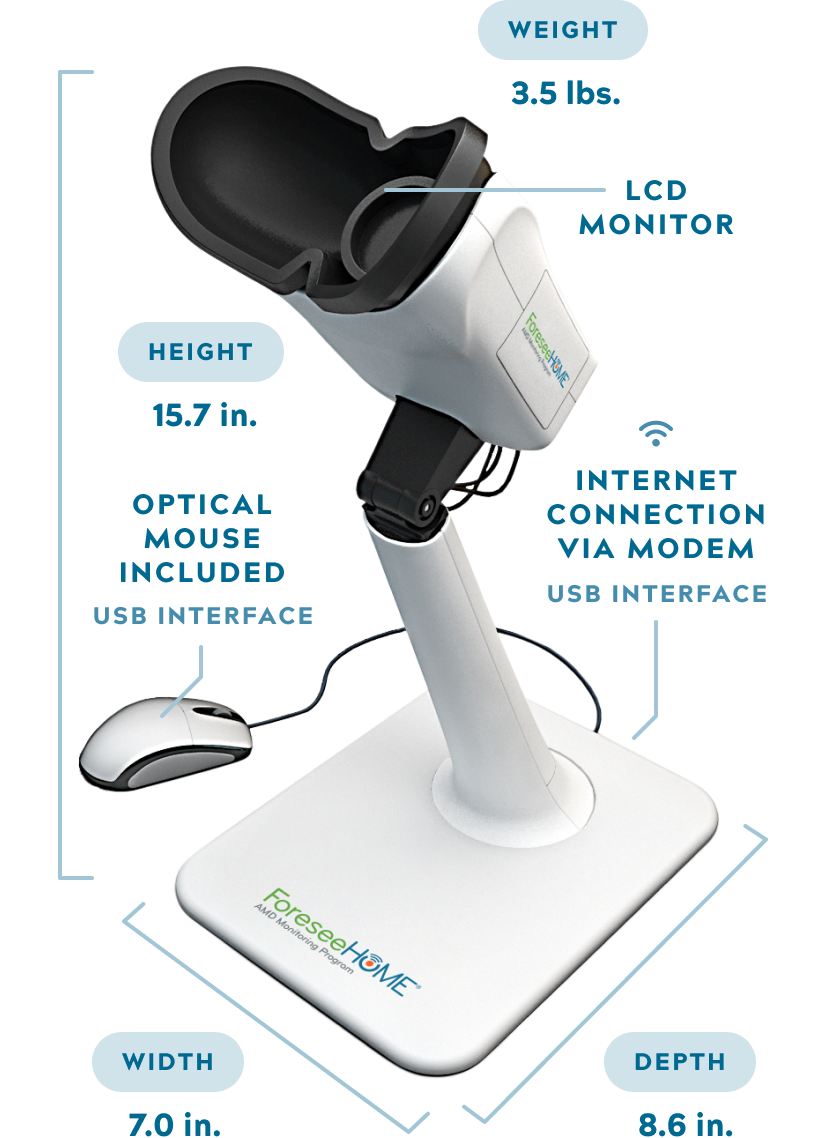 The ForeseeHome device uses a patented technology called Preferential Hyperacuity Perimetry (PHP), a proprietary psychophysical test used to identify and quantify visual abnormalities such as metamorphopsia and scotoma. Hyperacuity, or Vernier acuity, is the human ability to perceive small differences in the relative spatial localization of two objects in space.

During the test, stimuli are presented on screen for 160 milliseconds, successively flashing in various locations of the visual field. A typical stimulus consists of a series of dots, the majority of which are aligned with each other. A few dots are misaligned, creating the perception of a wave or artificial distortion in an otherwise straight line. Using the mouse provided, the patient’s task is to move the cursor to and click on the location where the distortion was perceived.

The brief presentation ensures that cortical completion is not engaged, and that fixation is maintained during the entire presentation of each stimulus. The presentation of the signal is triggered when the patient is fixating on the center of the screen. 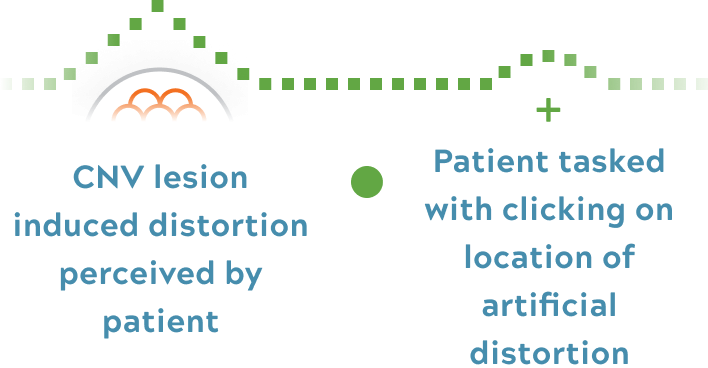 When the elevation caused by CNV is larger than the artificial distortion the patient will preferentially pick this spot of true distortion.

The macula is tested with 500 data points 3 to 5 times each within the central 14 degrees of the visual field.

Once pathology is suspected, the area is bracketed to localize and quantify pathology. When a patient clicks on the “pathological distortion,” the device’s algorithm will present stimuli of various magnitudes over the location to determine the size and shape.

After pathology is quantified and localized, an Alert Metamorphopsia Map is generated. This map, and all patient testing data can be found on the Eye Care Professional (ECP) Portal.